Airflow Control is a monitoring and alarm device, which can be used on both new and existing fume cupboards. The Airflow Control controls the airflow in the fume cupboard. In case of an unintended lowering of the air velocity in fume cupboard, the device will indicate this visually on the operating panel with an indicator lamp and via audible alarm.

The Airflow Control device consists of the following components:

The alarm meets the specifications and demands conforming to the statutory warning of permanent jobs, and is also available with relay for transmission of signals, e.g. for BMS. 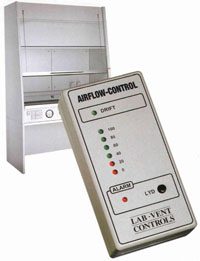 Download this PDF and read more about the Airflow-control.